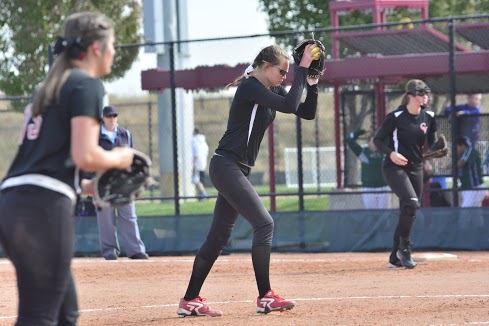 The stands teemed with fans at Aurora Sports Complex on Oct. 18, as Castle View’s Sabercats softball team readied to take on Fossil Ridge High School, ranked number one and also called the Sabercats, in the semi-finals of the state championship.

Castle View’s run for the top ended with a 2-1 loss after an intense game that went into extra innings. Although disappointed, the team looked back proudly on its most successful year and its finish in the state’s top four.

“Making it to the Final Four was a huge accomplishment for us this year,” coach Caley Mitchell said. “The game against Fossil Ridge was a nail-biter — we had a chance to win it and we came up short.”

But Mitchell reinforced how proud she is of the team’s season and achievements.

“. . . playing in big games like that only adds to our program’s experience,” she said. And “although we are losing three talented seniors, I am looking forward to next year.”

Pitcher Savvy Heebner, a senior who will play softball at the University of Houston next year, also couldn’t have been happier about the season.

“I’m so proud of every single person on the team,” she said, “and it felt so good to get as far as we did, and make history in the school.”

As one of Castle View’s most prominent weapons, Heebner posed a major challenge to Fossil Ridge.

“There’s always a lot of pressure on me as a pitcher, but I knew I had my team to back me up in any situation,” said the senior, who will play at the University of Houston.

The semi-final game was an intense, defensive battle. Multiple innings passed with no runs scored by either team. However, that changed in the fourth inning when Fossil Ridge scored and took the lead. Castle View quickly answered.

At the top of the seventh inning, senior Emily Stanton went up to bat for the final time in her high school softball career. She hit a line drive into the outfield, bringing the runner in for a CV run.

“I knew I had to score the runner or the game would be over,” she said. “I was so excited when I got the hit, knowing we were back in the game.”

With the score tied 1-1, the game went into an overtime.

“Going into extra innings made it all the more exhilarating,” said sophomore Lexi Kagan, the team’s catcher.

Castle View played with passion, but a game-changing hit by Fossil Ridge landed in the outfield, allowing enough time for its player from third base to score the winning run.

It wasn’t the ending the girls had hoped for, but the team remained proud.

“The loss was bittersweet, considering we were so close to winning it all,” Kagan said. “It was frustrating coming up short of such an attainable goal, but the journey was amazing.”